December 2019 saw Great Western Railway take on the biggest challenge there is for a train company – a major timetable change. For a train operator, a timetable change (such as the December one in particular), is the equivalent of the Olympics. Operators such as GWR spend years planning them and the team only get one shot at making it a success.

We worked closely with the GWR Comms team for two years in the lead-up to the change. The members of the team were helped by us, to communicate what was needed from all members of staff to ensure success.

In October, Great Western Railway asked Tantrwm to deliver an animated video. The animation made sure everyone knew what to expect and encouraged them to feedback on any potential issues. This meant that they could foresee anything that might make the transition difficult.

Working hand-in-glove with GWR’ Internal Comms department, we created a film that fitted perfectly with their branding. Using digital and printed materials that they had utilised previously, meant the film fit into their strategy seamlessly.

The animation showed how achieving their goals was similar to that of putting on a theatre production. We focussed on the different departments within GWR and placed them in the scenario of putting on a show. This showed easily how everyone was vitally important in making the timetable change a success.

By working with GWR on multiple animation projects we have built up an extensive library of illustrations and loops. Drawing upon this archive delivers great animated content, faster and more cost-effectively than ever before.

Tantrwms longstanding relationship with GWR  allows for us to really understand the challenges they face. This means that the videos we create for them fit perfectly with their branding, their corporate voice and their needs.

Check out our magazine with hints and tips on the many ways that animation can be used or give us a call on 01685 876700 to find out more. 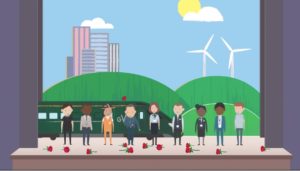